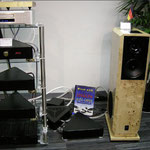 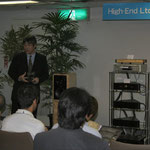 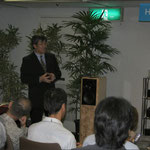 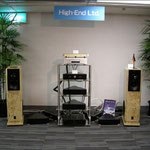 Of all the products I had the opportunity to see and hear I would have to state for the record that the most impressive goes to the Lansche Audio 4.1 loudspeaker ($45k designer Rüdiger Lansche photo right). Using an Ion tweeter is nothing new I'm told because there have been others, most notably Acapella loudspeakers uses the Corona Ion tweeter but I've not heard anything that sounded exactly like what I heard in this amazingly musical transducer. Partner and co-designer Henry Dienn sent me information on this unique transducer that in part states: "The tweeter does not generate any ozone gases as a ceramic catalyst prevents it from happening. Also once the temperature in the combustion chamber reaches over 350-degree Celsius ( 2 minutes after power on) ozone cannot occur as the temperature is too high. I would say the only possible health issue would be by looking with a naked eye directly into the plasma flame very close up (face pressed against tweeter's horn) for at least 10 minutes. It is possible your eye would suffer some damage, but then again looking directly in to the sun would too! We cross the tweeter over at 2.5kHz with a first order filter, so this means it is still operating below 1kHz! The tweeter does not require any special gas like helium, we just use the surrounding air."


Most interesting of all is what this room did in reproducing music. My handy and trusty reference CDs that were used in almost every room I visited allowed me to hear differences quite readily. With the Lansch 4.1, I started noticing things immediately. On Wishing Well from Pyeng Threadgill's CD "Of the Air", a certain sense of purity overwhelmed this recording I know so well. The strings for example had a sense of freedom from mechanical colorations I've not heard before...not even from my beloved DALI Megaline's 7' 7" ribbons! Yes, dear reader the sound was that tonally pure in the upper harmonic frequencies.

Now the midrange did not integrate with the woofer section to a manner I would qualify as seamless. One can never fully blame the loudspeaker when the room, (based solely on its boxy dimension and the 4.1's location in it) was the likely culprit as well. Moreover, not a hint of room correction was evident (shucks even the RIVES glorified E/Q would have helped here). In a word, the lasting impression I got from this rig was PROMISE! Worst case scenario: the Lansche Audio 4.1 could easily serve as an expensive but really cool cigarette lighter!